F-22 Raptor is the most formidable Air Dominance Fighter ever created, the stealthiest high performance fighter. Every fighter pilot would dearly love to fly it. With stealth,super-cruise,integrated avionics it is the most survivable and lethal fighter.

With super-cruise F-22 flies at nearly mach 1.8 without using its afterburners (uses sleek aerodynamics and high thrust engine P/W F-119 which develops 156KN per engine,and thrust vectoring which reduces trim drag). This combined with stealth and use of composite alloys which make it stronger to withstand high G's allow it fly at high altitudes(notably at 67,000ft) . Overall it makes F-22 difficult target to reach because it combines aerodynamic performance with high degrees of stealth (which newly developed stealth fighters will lack).

The F-119 engine is digitally controlled one,"set it and forget it" type power plant. This engine self diagnoses itself and adjusts performance as we ask. Even when the engine has failed sensors and minor equipment it still continues to run. In short one of the best reliable engines.

Now super-cruise will add another advantage to the Raptor it also increases its weapons range especially AIM-120D ,it allows to the missile to launch without requiring the powerful booster to ignite so denying its opponent usual detection of missile. Thereby the Raptor gets "First Look, First Shot, First Kill" .This also raises the missile hit probability to around 35-39% in BVR which other 4.5 Gen fighters in current service lack .

Coming to Avionics it has two radars, one is AESA(AN/APG-77) and other PESA (AN/ALR-94 which is a Radar Warning Receiver basically). AESA is low observable active electronically scanned array which can track multiple targets in all weather conditions. PESA has longer detection ranges around 250nmi . If F-22 uses PESA and switches off its main AESA it is even more difficult to track.

Considering all these factors F-22 is expected to be dominant till at least 2020 till other 5th gen fighter will try to compete it.

Though lot of people believe this plane can do best in BVR only ,it can do good in WVR as well.

F-22 will have better rate of climb than other 4-4.5 generation fighters and upcoming 5th generation fighters because of fixed inlets, high weight and larger wing(High weight leads to conversion of potential energy to kinetic energy while diving) it has 375kg/m2 wing loading which is on little higher side and has Thrust Vectoring to compensate it. It enjoys the best in class T/W ratio of 1.26 when in loaded weight with 50% fuel (1.09 T/W ratio with fully loaded and fuel). In addition it can maneuver better than almost all fighters currently being operated at high altitudes( it sustains 6 g's and above at 62,000ft with mach 1.82) above 45,000ft where every fighter struggles to perform the Raptor just Flies off. Most fighters have their best performance envelope at 35,000ft most notably the Eurofighter Typhoon which as i believe scores best for its agility. F-22 has +/- 20 degrees thrust vectoring canal which generates good pitch and yaw control, the best nose pointing ability. If thrust vectoring and rudders are used simultaneously it generates exemplary roll rates.

Clearly sharp angles visible when taxing ,it results not only in good stealth but less drag. 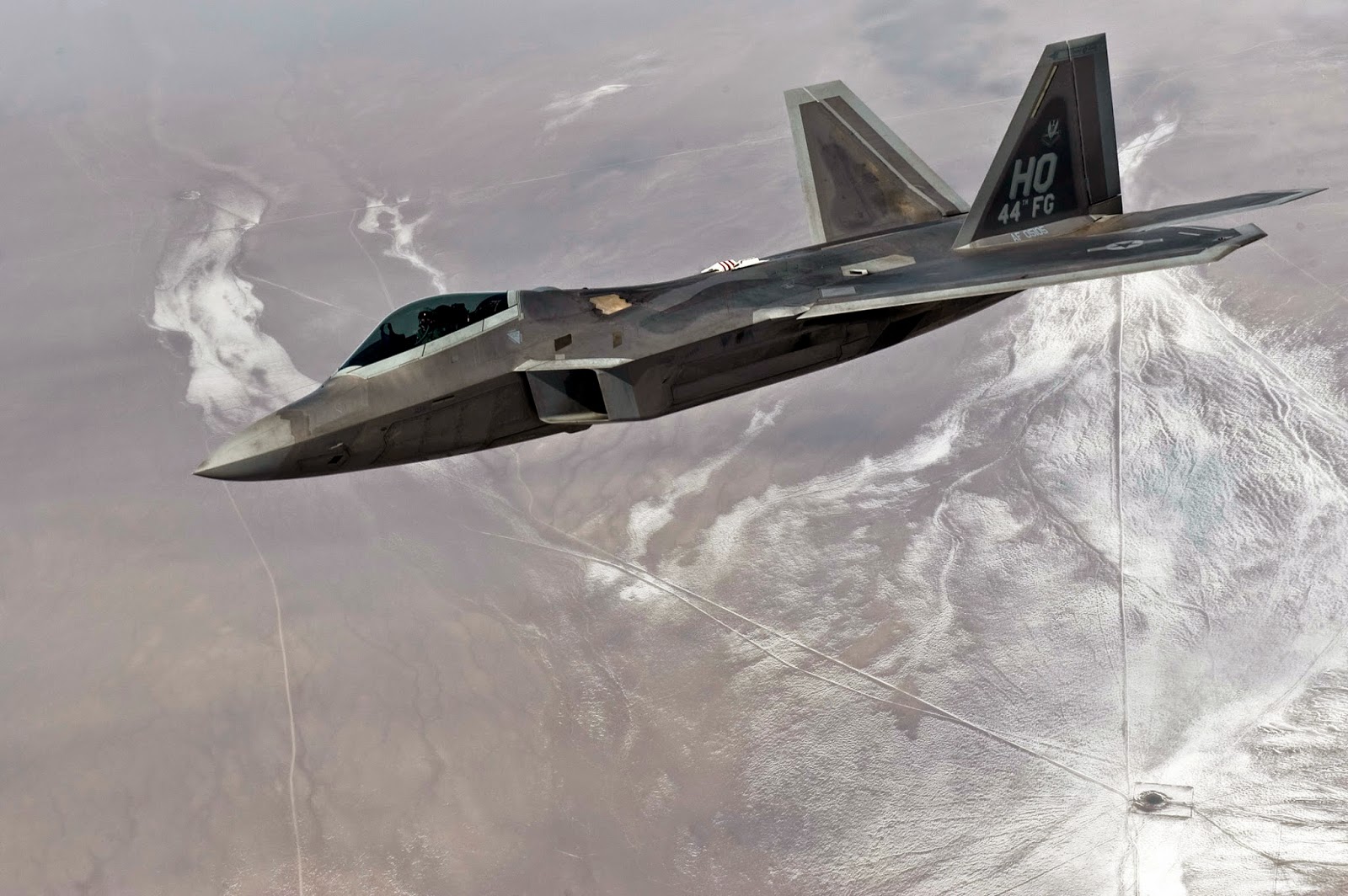 RAM coatings on nose and inlets visible ,Raptor has the best stealth features from head on.